Doesn't time fly the older you get. It was on this day back in 1976, that I joined the RAF as a photographer. And what an excellent career it was, until I left 33 years later.

A lot has happened in that time and when I was married, I had 4 wonderful children and then later became a Grandad 6 times over. Until today that is, when that became 7, when my eldest daughter gave birth to Miles Sinclair MacVine. Congratulations to Laura, Jack and their eldest son Noah.

It was also a day when I was stuck at home waiting for 3 home deliveries and then managed to get away later in the day to pick up my "new" second-hand car, before the last delivery was due.

Consequently there was no walk today and the only birds of note were a 30+ waders (presumably Dunlin) and a couple of Little Terns I managed to see as I crossed over Ferrybridge.

At home the Great Tits are still bringing nesting material to the nest box and after last nights gale force winds, which peaked at 55mph, the bees are really struggling to find any pollen on the battered Cherry Tree. 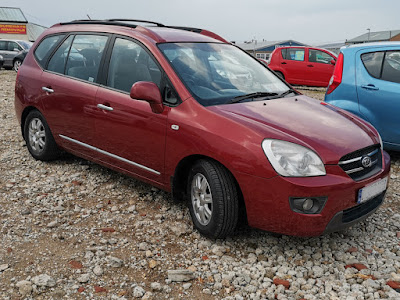