Since the August Bank Holiday, I've visited the St Aldhelms patch for short pre-work visits most mornings, with longer visits at the weekends. There has generally been a steady selection of  expected migrants, but in small numbers with Wheatears, the occasional Whinchat or Redstart, as well as, the standard Warblers, Whitethroat, Blackcaps, Willow Warblers, Chiffchaffs & a few Lesser Whitethroats. All three of the regular Hirundines were on the move a couple of weeks ago, but is now largely Swallows. Overall, it's been hard work, although the Bank Holiday Monday was good with my first St A's Dartford Warbler and a Short-eared Owl that flew in off the sea just to the East of the front quarry. The Short-eared Owl was distant & as I was going to struggle to confirm it wasn't a Long-eared Owl at the range it was, I lifted the camera & hoped the photos would help. They did: as well as confirming it was my second patch Short-eared Owl, they also revealed it flew past a Hobby sitting on a fence post that I hadn't seen. Can I add that to the patch Year List?

Last weekend, Phil Saunders, AKA @BeardyBirder, was back on the patch. While Phil is great Birding company, it's quite depressing Birding with Phil as it highlights how many calls, I'm now missing with the tinnitus that has developed in recent years: especially Tree Pipits, more distant or higher species. The worst of which was a Lapland Bunting that Phil heard call (I didn't) & we watched disappear into the distance: I couldn't get anything on it in flight & I had to throw it away. A patch Tick missed.

This morning the alarm went off to get me up again & onto the patch. It had been a tough morning yesterday with a F4 SW wind, a bit too exposed in most areas at St Aldhelms & not a lot of note. The forecast was for a light F2-F3 SW wind. It had looked like the wind hadn't dropped as much as forecast when I got up, so I decided on another cuppa tea, before heading out. Yesterday, I had been on the patch about 06:30, today it was 08:10. I stopped as I always do on the road by the My Time centre near Renscombe Farm to scan the fields. I've seen a few Wheatear in these fields this Autumn, but little else of note. No Wheatears today, but seven Meadow Pipits flew out of the first field & landed on the fence, close to the car. I drove on to check the next field. The seven Meadow Pipits flushed, but landed on the fence again, but had encouraged another eight to join them. I checked them again & the first individual I looked at was a Lapland Bunting: Patch Tick. Fortunately, the camera was on the passenger seat & it was quickly lifted, powered it on, removed the lens cap & poked out of the car window. I'm afraid I'm a Birder & not a togger. Had I been the latter, I would have rushed out of my car, wearing an all in one camo suit & booted everything. But being a Birder, I stayed in the car & blasted away with the camera, hoping the previous day's settings were OK: they were. 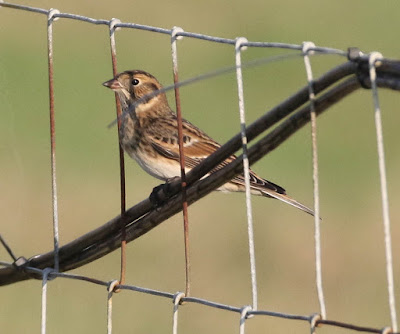 Lapland Bunting: A species I wanted to find locally for many years

It dropped off the fence & onto the grass verge, which allowed more photos. After enjoying a quick view with the bins, I texted a few locals, tweeted a photo out & looked up: no sign of the Lapland Bunting or any Meadow Pipits. They had probably decided to drop back into the field, but further back, as I couldn't see them near the fence. Time to leave it in peace & head onto the car park, as I was keen to get on with the walk to the coastguard's lookout. After about a half mile walk, there is a left hand track, by an open sided metal barn. This is often worth a look. Today it held no migrants, apart from a lone Whitethroat. Just as I was leaving, I heard a call I didn't recognise. I looked up to a chunky Passerine flying over, it looked about the size of a Yellowhammer, but shorter tailed & bulkier bodied, but not as chunky as a Corn Bunting. The flight was strong & level. It carried on SSW over the field for over a mile before I lost it over the coast path to the West of the coastguard's lookout. I couldn't see if it had come down or carried on. I can't be certain if it was the Lapland Bunting, but I've struggling to think what else it could have been. Later in the morning, I had a good look in that area, but with no joy. But the coastal walkers had already been walking past by the time I reached the area. Presumably it reached the coast & then coasted West or been disturbed by walkers. 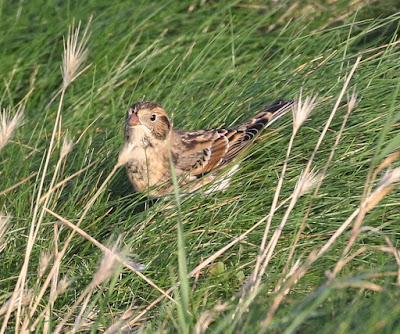 Lapland Bunting: I may struggle to hear them, but the eyes still work as does the camera trigger finger