Finding Your Own Juvenile Yellow-legged Gull

Magazine Date
31-07-20
Magazine Article
Towards the end of June there was talk on birdy Twitter, speculating about whether we would see any juv Yellow-legged Gulls before July, which is when they generally appear. And indeed, it happened. Then, through the next few weeks, we were (and are still being) blessed with countless images of the lovely brutes. In parts of London and the south-east they are relatively numerous, in other places less so. In some areas of the country they are genuinely scarce or even rare. To many observers I can easily imagine that all this glib YLG talk on Twitter and elsewhere must be slightly irritating, especially if you find the whole identification process difficult and confusing, and/or they are very scarce where you live.

Regarding identification, I am sure there are many excellent resources to draw upon, so this post is not going to be a comprehensive ID guide. However, the other day I got a jammy photo which might be useful - especially to beginners at the gentle art of gull...

This photo is quite instructive for a number of reasons, but I'm going to stick with just two. You've probably heard of the 'inner primary window' being a helpful pointer in separating juv HG and YLG, but maybe you're not sure what it is, exactly? Or what to look for? And what about the 'plain outer greater coverts'? Excellent feature, but where on earth are they when they're at home? Good questions all... 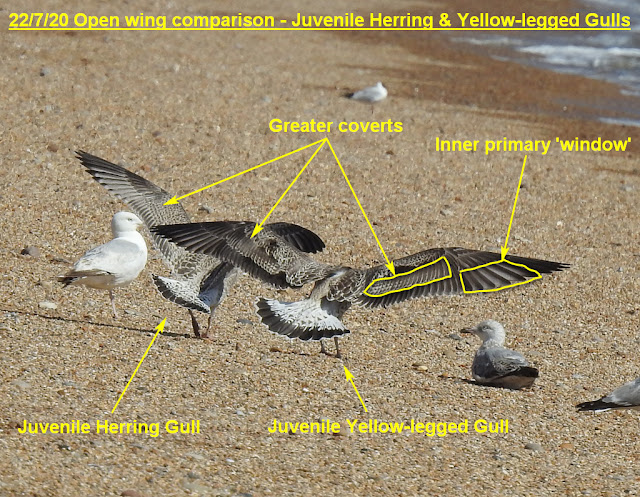 Inner primary window
This is basically a paler panel visible in the spread primaries, and is formed by paler areas on some of the primary feathers. Herring Gull usually has a strong and obvious inner primary window, whereas on YLG it is present but weak. This photo demonstrates the difference very well.

That all said, on a bird flying past at eye level it can be a surprisingly difficult feature to evaluate!


And without all the yellow lines it looks like this... 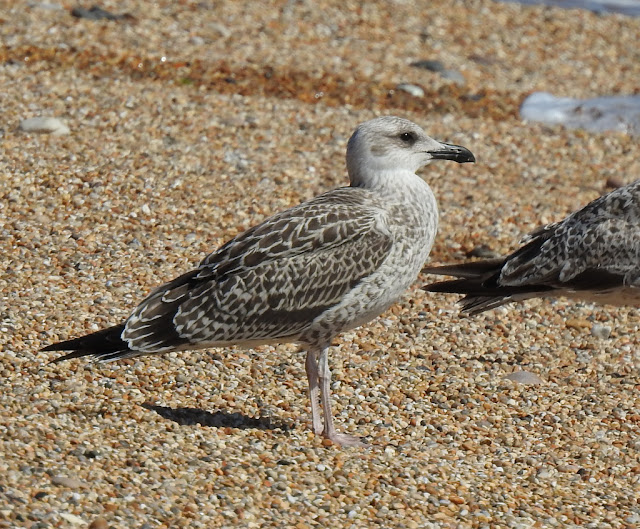 Depending on how the wing is held, that dark rectangle can be all but invisible! So just because all you can see are a load of boldly chequered greater coverts, well, don't rule out YLG without checking other features. But if you can see it, chances are you're in with a good shout.

Yep, gull ID is a minefield!

The best advice I can offer is to look at as many gulls as you can, as often as you can. Slowly, slowly the pieces of jigsaw will begin to fit together. I do not know of any other way to do it, and certainly not a quick way. I've been trying to think of an illustration to explain it, and the best I can think of right now is this: if you own a pet dog, and had to pick it out of a line-up comprising umpteen other examples of the breed, long-term familiarity would enable you to ID it immediately. Well, I hope so, otherwise my analogy has failed! Anyway, that's what it's like with gulls. Familiarity with the common ones makes the scarce ones leap out at you. At least, one always hopes so...

So if you have yet to find your first juv YLG, happy hunting...